The call came on Dec. 14. It reminded Rod Carew of a call that he received in January 1991, when he learned that he had been elected to the Hall of Fame on the first ballot.

Only this was better. Much better.

“Bigger than the Hall of Fame,” Carew said.

After spending nearly a month on the transplant list, he would be getting a new heart and new kidney at age 71.

The procedure took place at Cedars-Sinai Medical Center in Los Angeles on Dec. 16, lasting 13 hours. Carew was in intensive care for about 10 days, remained at Cedars-Sinai until Jan. 12, then spent more than two weeks in a rehabilitation center at Keck Medicine of USC.

On Saturday, he returned to his home in Orange County, Ca.

“It’s been a long journey,” Carew said Sunday in a telephone interview, “but everything just came out right, the way everybody wanted it.” 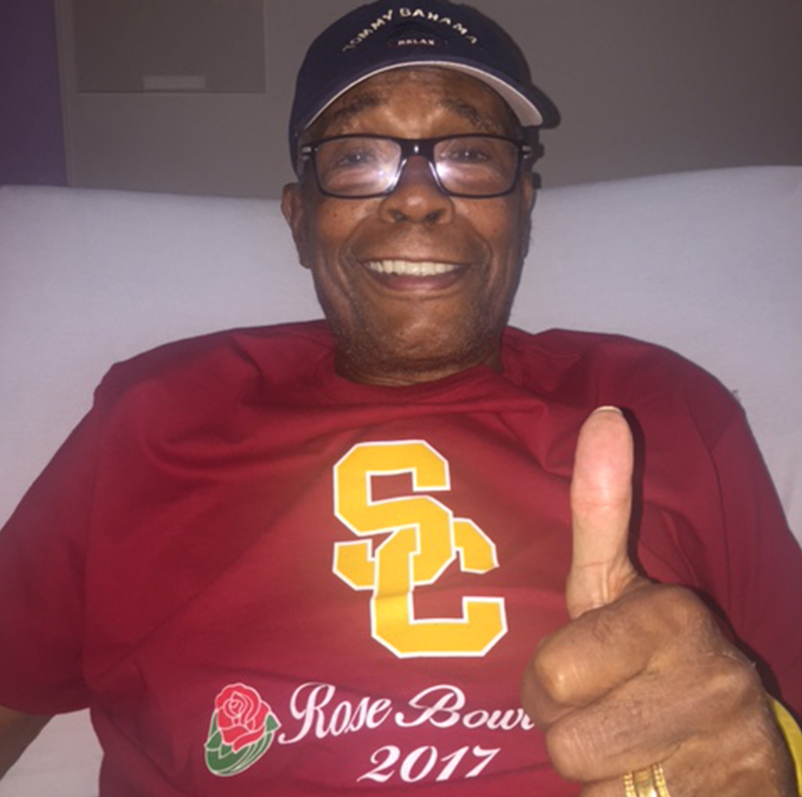 Courtesy of the Carew family

During a span of 15 months, he survived a massive heart attack and three operations – a six-hour, open-heart surgery for the insertion of a Left Ventricular Assist Device (LVAD); a procedure to drain two blood clots on his brain, delaying his eligibility for a transplant; and then, finally, the delivery of a new heart and kidney.

Finally, the worst appears over.

No longer is Carew on blood thinners, which sapped his energy. No longer must he wear the bulky battery packs and small computer attached to the LVAD, a combination that Carew said weighed about eight pounds and also wore him down.

Doctors predicted, correctly, that his recovery from the heart transplant actually would be easier than his recovery from the insertion of the LVAD. His wife, Rhonda, said that while Rod was initially fatigued, he is more alert than he was after his first operation, ready to live a near-normal life.

Shortly after the transplants, Carew said he was like a baby learning how to walk, trying to get up on two legs. As his rehab specialists pushed him, he would ask himself, “What am I doing here? Do I need this headache?” But looking back, he is grateful to all who cared for him.

He is talking about playing golf. Attending his 54th straight spring training. Even getting married again to his wife, Rhonda — a second wedding for his second life.

To attend spring training, he would need to drive with Rhonda to Arizona, where he could visit his second team, the Angels – he cannot fly for at least three months, ruling out a visit to Florida, the home of his original club, the Twins.

Carew, though, is unfazed. He plans to visit Minnesota this summer and attend the Hall of Fame induction ceremony in Cooperstown, N.Y., lead the life he envisioned for himself and Rhonda as they got older.

After so many months of anguish, so many moments that made so little sense, everything finally is adding up.

The great second baseman wore No. 29 in the majors. He started the “Heart of 29” campaign with the American Heart Association to raise awareness and prevention of heart disease. And wouldn’t you know it? He knows only one thing about the anonymous donor of his new heart and kidney: The man was 29.

“They found me a 29-year-old heart,” Carew said, chuckling. “You never know, it could be time for a comeback.”

Courtesy of the Carew Family

After his heart attack on Sept. 20, 2015, Carew spent 47 straight days in five different hospitals. Almost immediately, he began counting down the days until he would become eligible for a transplant, six months after receiving his LVAD.

On July 29, shortly after returning from last year’s induction ceremony in Cooperstown, he was scheduled to undergo a heart evaluation at Cedars-Sinai.

But another emergency struck, forcing him to miss that appointment.

Carew, after the insertion of his LVAD, went on blood thinners; in some patients, the continual flow from the pump leads to internal bleeding. Carew had one such episode in May and two more in June, but those were gastro-intestinal, Rhonda said.

The one at the end of July was different.

A CAT Scan revealed that Carew had a subdural hematoma, a collection of blood outside the brain.

“It caused him to go crazy, off-the-reservation crazy,” Rhonda said. “The clots were putting pressure on the brain. That causes some swelling, and kind of just sends you to a different planet.

“He was agitated. You’d ask him to put his finger to his nose, and he couldn’t do it. He didn’t understand what you said. It was just weird, very different.”

Doctors told the Carews that the surgery to drain the clots would be relatively minor, a 1 on a scale of 1 to 10. Carew, though, had to be hospitalized for another six weeks, postponing his possible addition to the transplant list.

The only benefit, if you want to call it that, was that Carew had to go off blood thinners, putting him at greater risk – and strengthening his case for a new heart.

Rhonda said she worried that Carew’s risk also was increasing due to his age — he turned 71 on Oct. 1 — and the deteriorating condition of the right side of his heart, the side that was not supported by the LVAD.

But not without intervention from Rhonda, whose nickname is “Pit Bull” — and whom Rod describes as “relentless” in her advocacy for hm.

“We kind of sort of conspired — not Rod, I did — with a couple of his LVAD doctors,” Rhonda said, referring to Dr. Dan Meyer and Dr. Ajay Srivastava of Scripps Memorial Hospital La Jolla.

“I thought he should be higher on the (transplant) list than he was originally placed. With the highest-priority listing, you know you’re going to get the organs sooner.”

The highest-priority listing, 1A, was for patients who were hospitalized and needed a new heart to live, Rhonda said.

Initially, Rod was 1B. Expecting to get the call in the middle of night, he would wake up Rhonda and say, “Why haven’t they called?” or, “I think they forgot about me.”

Rhonda and his doctors successfully lobbied for Rod to move onto a middle level — 1AE, or 1A-exception. It was for patients who were at risk, but did not need to be hospitalized to live.

Five days later, he got the call.

Courtesy of the Carew family.

Former reliever Kent Tekulve, who underwent a heart transplant on Sept. 5, 2014, had told Carew that the call would create excitement like nothing he had experienced.

Still, so much was running through Carew’s mind.

“I wasn’t scared,” he said. “I was just wondering when and how and if it’s going to work.”

Heart transplant survival rates vary, but the overall rate in the U.S. is about 88 percent after one year and about 75 percent after five years, according to a 2014 report by the Organ Procurement and Transplantation Network and the Scientific Registry of Transplant Recipients.

The first month after surgery, heart-transplant recipients undergo biopsies every week to test for rejection, Rhonda said. The frequency of biopsies reduces to every other week in the second month, and one per month in the third.

Transplant recipients generally face no specific activity restrictions, but must take precautions to prevent exposure to infections for the rest of their lives.

Carew understood, as all transplant recipients do, that his body might reject the organs. But he thought of his donor, and how he wanted that man, wherever he was, to know that his organs were going to a good person, someone who would take good care of them.

A conversation with Dr. Amy Christianson, a psychiatrist at Cedars-Sinai, helped.

“I’ll tell you this: After I spoke her, I felt really good about what was going on,” Carew said. “She gave me a lot of confidence, just told me to keep pushing. After that talk with her, I said to Rhonda, ‘Honey, let’s get a new heart and start a new life.’

“It’s very interesting, the things you go through mentally, hoping that this is it, that you’re not going to have any more problems. I’m sure down the line I might. But I’m not going to let those little problems kick my rear, tell me I can’t do it. I now know that I can do something with myself, with the new heart that was donated to me.”

And yet, there is one missing element.

The Carews have no idea who Rod’s donor is; they were told only that he was 29, that he died at UCLA Medical Center and that he was in exceptional health.

The donor’s family, meanwhile, does not know that it was Carew who received a heart and kidney from their loved one; they know only that they went to a man in his 70s.

Rod and Rhonda both said that they would like to meet the family. Rod thinks back to his daughter Michelle, who died of leukemia at age 18 in 1996. He recalls his intent to thank the family if Michelle had received a bone marrow donation, but the right match was never found.

The recipient of an organ cannot request a meeting; only the donor’s family can. Some families prefer not to revisit their grief; others want to know that a part of their loved one lives on.

Cedars-Sinai recommends that a donor’s family wait at least a year before initiating contact with the recipient, though the family can ask to connect earlier if they choose, Rhonda said.

A year gives the donor’s family time to endure all the “firsts” that occur after a loved one passes, and time for the recipient to move past the greatest risk of rejection.

“I desperately want to meet them,” Rhonda said. “Rod hasn’t focused on it, but I have. I think it would be really a neat thing for the donor’s family to have the ability to listen to their son’s heartbeat again.

“You cannot connect with any other donated organ in any way, shape or form; you see that the person looks really good and they’re doing well and it’s because of the organ they received. But the family can actually hear the heartbeat when the heart is the donation.”

Yet, Rhonda understands that the dichotomy that exists between the families — the devastation on the donor’s side, the elation on her own.

“It’s really hard to reconcile,” she said. “I totally understand if they don’t feel like they can go through all that again by meeting the recipient family. But I’m hopeful. I’m hopeful.”

The heart of 29 lives on, in more ways than one.